City to sell $20M in bonds for downtown convention center

A conceptual rendering of a proposed $15 million convention center in the heart of downtown Muskegon. Design and architectural work is being handled by Grand Rapids-based Progressive AE. (Courtesy | Progressive AE)

MUSKEGON, MI — City officials plan to sell $20 million in bonds to pay for the construction and furnishing of a proposed $15 million convention center in the heart of downtown Muskegon.

City and county leaders hope the convention center will boost tourism throughout the year. It is also expected to help bolster sagging winter occupancy numbers for downtown and surrounding Muskegon-area hotels.

Progressive AE is currently drafting design plans for the convention center, which could be located on Fourth Street between L.C. Walker Arena and the Holiday Inn.

Muskegon County and city officials agreed this year to use a new 4 percent self-assessment tax from the downtown Holiday Inn and the Shoreline Inn to help pay off the construction bonds.

Jon Rooks — who owns both downtown hotels — will forward proceeds of the assessment for 27 years. The city plans to finance the convention center over 25 years, meaning it will set aside the last two years of revenue for the center, said Muskegon City Manager Frank Peterson.

Peterson said the next steps include a bit of a waiting game and a bond auction that will eventually set the interest rate on money borrowed.

Grand Rapids-based Progressive AE has been tapped to determine the size, location, amenities and costs for the $15M convention center.

First, anyone opposed to the sale can file a petition for referendum, but they would have to do so within 45 days from the date a notice is published in the Muskegon Chronicle. Assuming no one objects, the city will move forward and consult a bond attorney before taking the sale to market, Peterson said.

“(Interested buyers) will bid and then we’ll find out what the interest rate is,” Peterson said. “We don’t know what that will be quite yet, but we’ll also have our bond rating (reanalyzed).”

The city was most recently given a AA bond rating, which Peterson said was strong and will be favorable for Muskegon. Once design work is complete, the city will have final estimates for construction and other associated costs.

The proceeds from the bond sale will help pay for all or some of the cost to construct, furnish and equip the new convention center. That includes any land acquisitions, demolition or necessary improvements.

Officials also hope to have contingency dollars in place if construction runs over budget. 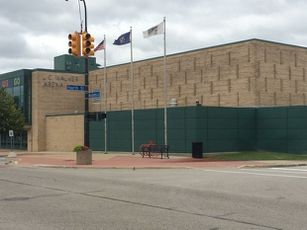 Convention center in downtown Muskegon gets consultant to shape plan

The Muskegon County Board of Commissioners voted to approve the $20,000 consulting contract with Conventions, Sports & Leisure International.

County and city brass have expressed an interest in placing the convention center on a portion of Fourth Street between Shoreline Drive and West Western Avenue. Progressive AE will help them determine if that’s the best location. The other option is to place the center atop the downtown Holiday Inn’s parking deck behind the hotel.

A project timeline outlined by Progressive AE assumes design work will be completed sometime this year with construction beginning in 2019.  Late last year, officials said the convention center would likely open in 2021, if all goes according to plan.